Learning from ‘The Work’ – a film on therapy in Folsom Prison 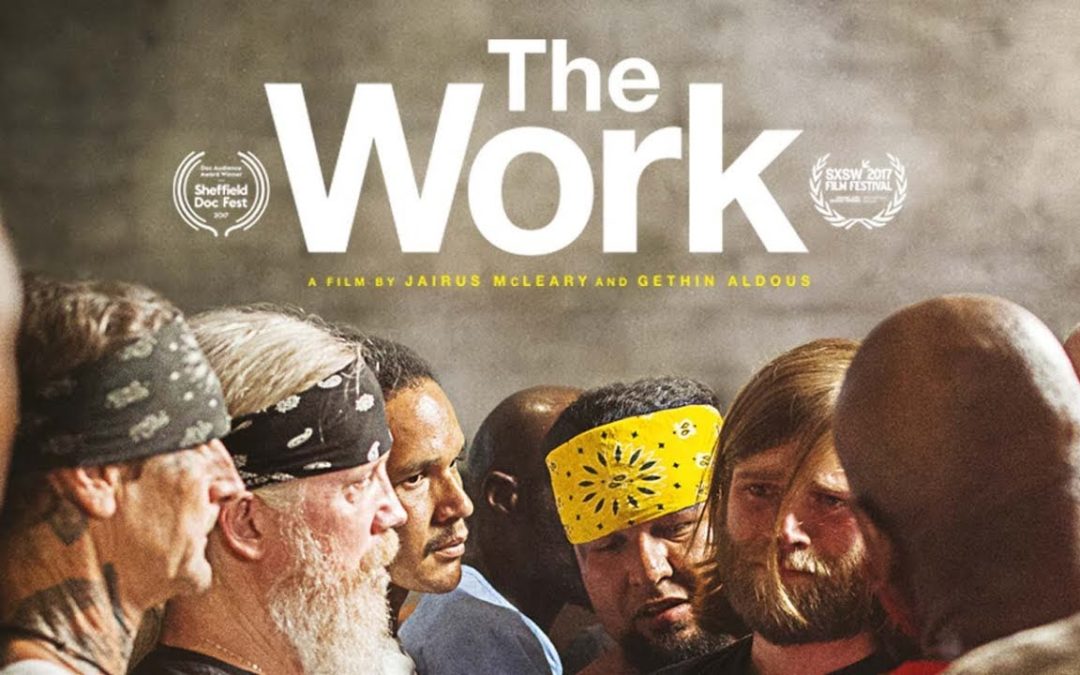 There is a moment in The Work at about 20 minutes. Two men are standing eye ball to eye ball. They are in a group of other men standing in a circle around them. You are aware of the noise of other circles of other men.

The stillness and the intensity between the two men standing is mesmerising.

‘May I touch your jaw?’ You realise this voice is from another man. A facilitator it turns out. He is reaching towards Kiki.

Kiki melts. Kiki breathes. Kiki collapses. Two contacts at the jaw support a loosening of the jaw muscles. Then there is a kind of a gasp, some big breaths and then Kiki folds into the arms of the man opposite him, named as Vegas. They both drop to the floor. Kiki is sobbing.

The other men move in and squat, one leans in with their back and others hold. ‘Let him him know you are there’ comes the call from another facilitator.

There is a wave of activity as Kiki moves from collapse to rage. He begins to struggle and shout. The other men provide resistance and contain his movements. The struggle subsides. Something has changed.

Set inside a single room in Folsom Prison, The Work (McLeary and Aldous 2017) follows men in a four-day group therapy retreat. The retreat is an interaction between volunteers from outside joining with level-four convicts. The history of the convicts is appalling.

It is amazing to observe that most of the therapeutic interventions come from the convicts towards the men from the outside.

Some of the men on the inside have developed next level skills of being present. To witness Vegas in action is a masterclass in authenticity and presence.

(The follow up on Vegas, now named as Eldra Jackson III, is inspiring. He is free after more than two decades in prison (Jackson 2018). He is now the co-executive director of Inside Circle (Inside Circle 2022)).

The Work was filmed in 2010 and released in 2017. The occasional 4 days retreats, mixing men from the streets with men on the inside, are part of a larger program of regular weekly groups for the convicts. Some of the men on the inside, it is clear, have done huge amounts of work and are very skilled. As are the facilitators.

There were some visionary prisoners, staff and therapists who came together to create the program. Inside Circle is the organisation that emerged from the initial groups started in 1996 (Inside Circle 2022).

Kiki has been in prison for 17 years. Like many of the convicts he was a gang member and committed horrific acts of violence. Kiki at the start exudes toughness and machismo swagger (Ho 2018). It is his first retreat. But he is open. He steps into the circle and wants to explore his fear of never being able to mourn his sister’s death:

It’s a ‘rare gift’ to see a man express emotion as openly as Kiki (Ho 2018). Kiki’s process profoundly shakes one of the men who has come from the outside. There are tears on his face. The openness and vulnerability spreads. The outsider gets time inside the circle; ‘don’t hide it, don’t run’. We gradually hear his story of being fatherless and lost.

I am viewing the film primarily as someone who works with people in groups to explore trauma and intense experiences. I teach Relational Touch and TRE® (Tension and Trauma Releasing Exercises). There is so much to learn, much of it challenging.

I am in awe of the intensity that the facilitators hold. The context is important. Much of the work they do only makes sense in terms of the extremeness of the men’s lives and situations. I remain cautious about intensity for intensity’s sake. There are many subtle framings of the goals of the therapeutic process that are easily missed. This is not a celebration of catharsis. But, intensity met safely can transform.

The amount of touch in the film is incredible. Men are hugging, men are placing hands on backs, men are leaning into each other, foreheads touch. Sometimes gentle touch, sometimes resisting strongly in groups. Men are holding each other, one to one and sometimes multiple men providing a container for gestures of rage. Or multiple men lifting one man so he can move and be carried.

The amount of community in the film is incredible. ‘Lets step into the fear. I am with you, open up.’ Some of these groups have been running for years. There is a world of violence and segregation in the yard of the prison. But in the retreat, the men agree to come out of their affiliations to become a community where vulnerability is explored. The bringing in of men from the outside – a bartender, a museum worker, a teacher assistant – to learn from convicts is a remarkable feature of the process.

‘What they found unique to this work was that convicts do not suffer fools. “You cannot BS your way inside a prison. They see right through you, and it’s scary”’ (Ho 2018).

The therapeutic work is deeply embodied. The men chant at the start, it’s spine tingling. They stand to talk, they step into the circle, eye contact is maintained. To feel involves gestures and action; ‘let your hands go’, ‘relax your jaw’, ‘breathe’. In another extraordinary sequence, it is not enough to articulate the hurt. The attempt to transform the narrative requires action to push towards another, with people in the way. ‘Cry with your head up’. ‘You have shown us you can bite it down, can you show us you can let it out.’

I have been a little bit obsessed with this film over the last few days. There is so much to make sense of. Other things that have stayed with me:

-The tragedy of ‘fatherless sons’

-The absolute centrality of the need for respect for these men

-Male rage and violence rooted in old traumas and shame

-Going deep into feelings as a central paradigm for healing (There is poem that is offered, loosely: Don’t stay at the surface, visit the bottom of well as the source of the pain but also the source of healing, at the bottom there are discarded gold coins, can we find the gold and return to the surface, we are not just dropping into pain. There is a sequence where the lament is the gold coins are ‘covered in blood, too much blood’, someone retorts the ‘blood can be wiped off, gold is gold’.) ‘Going deep’ is a complex metaphor, the facilitators use it well, ’The process of going down into the wound is not an end in itself’. I am still pondering the limitations and strengths of going deep as, seemingly, the defining metaphor for the healing process.

-Express feelings or try and hold on for ever. But only holding does not work, the violence will leak in to every area of your life and every relationship you have.

As a film I found The Work deeply moving. However the nature of films is to emphasize drama. Kiki, prior to his collapse, talked of wanting to let the ‘floodgates open’. Thats quite an expectation with which to start your therapeutic journey. There is a lingering unease that the film highlighted moments of cathartic letting go in a way that reinforces a particular expectation of what happens in a therapeutic process.

The ‘massive internal shifts’ through the ‘transformative environments’ created by Inside Circle are years in the making (Inside Circle 2022, Our Impact). The lack of reoffending rates are remarkable. Something is working, but it would be a mistake to focus only on the drama and intense retreat model shown in the film.

Aside from being a trainer and therapist, I also watched the film as a human and as a man. The world shown is completely alien to me. It terrifies me in many ways. The film is a challenge to watch. Men on the edge with violence in the field. There are some devastating stories to be heard.

It made me reflect on my edges. I am going to work harder to not get activated when I feel people are telling me what do to. My version of the respect story that needs some work.

I come away inspired about the fundamental importance of presence, community, touch, embodiment and feeling. Even the most difficult, violent, traumatic stories can be transformed.