Links between pain and trauma 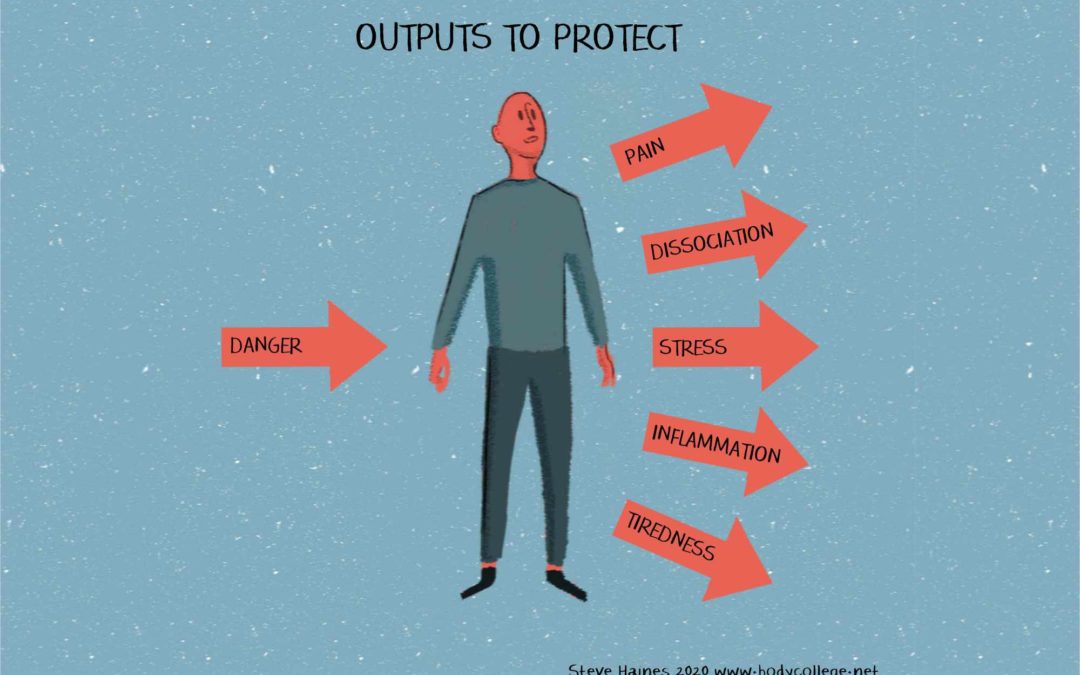 Links between pain and trauma

Polyvagal theory developed by Dr Stephen Porges is very influential in the trauma world. The essence of polyvagal theory is that feeling safe is the fundamental drive for humans. If there is the perception of danger (‘neuroception’ is the term used by Porges), then we have a range of protective physiological reflexes; ‘social engagement’, ‘mobilising’ or ‘immobilising’.
Unfortunately most of the pain literature I am aware of does not reference trauma or polyvagal theory. Here are some links that help bridge from polyvagal theory into some of the research in chronic pain.
There are good discussions on body mapping and distorted perception of the body in pain. I would link distorted body perception strongly to immobilisation, and the associated dissociation, outlined in polyvagal theory.

Kozlowksa et al (2015) Fear and Defense Cascade, is a big summary of the physiology of fear. It includes polyvagal theory and also looks at some analgesia pathways that may be activated in parallel to changes in the autonomic nervous system in response to threat. It is quite a dense paper, but very good to help understand there are a range of nervous system patterns in threat response.
https://www.ncbi.nlm.nih.gov/pmc/articles/PMC4495877/

In pain science there is a clear definition of pain as a protective reflex in response to perception of danger (often unconscious and habitual). This is a link to the importance of neuroception and finding safety in polyvagal theory.

‘Pain is, at a very fundamental level, all about your brain’s assessment of safety: unsafe things hurt. If your brain thinks you’re safe, pain goes down.’
Paul Ingraham http://saveyourself.ca/articles/central-sensitization.php

Inflammation, immune system activity and complex interactions with the nervous system are discussed at length by pain specialists and help to explain the complexity of chronic pain.

The Mystery of Chronic Pain – Dr Elliot Krane (2011). This is a wonderful 8 min talk on how pain can amplify and that it involves nervous and immune system interactions.
http://bit.ly/2DNcG9s

The perception of danger is the input that triggers an array of protective reflexes.

‘The basic idea is that chronic pain is often driven by dysregulation of a “supersystem” that coordinates defensive responses to injury. The supersystem results from dynamic interaction between different subsystems, most notably the nervous system, immune system, and endocrine system.’
Todd Hargrove 2014 https://todd-hargrove-xyvo.squarespace.com/…/a-systems… You can also find versions of this framework in Moseley GL and Butler DS (2017) Explain Pain Supercharged. NOIGroup

Here are two great blogs discussing trauma informed pain care from a patient perspective (but outside of polyvagal model).

‘With sufficient understanding of trauma, I believe my clinicians could take steps to avoid, or at least minimise, inadvertently causing me increased stress or re-traumatisation and support me to understand how past trauma may play a part in my persistent pain condition. Most importantly I would hope my clinicians would value and promote my resilience and enhance my well-being.’
https://livingwellpain.net/trauma-informed-care-for-persistent-pain

A note of caution, suffering is complex!!!

‘Let’s not make people feel that the trauma they experienced was the main reason they are experiencing persistent pain’.
https://livingwellpain.net/dear-clinician-early-trauma-and-pain